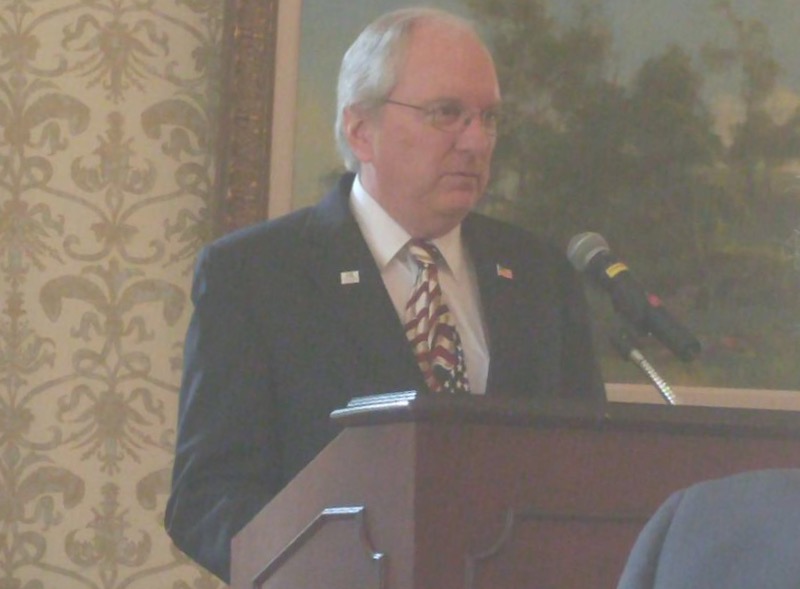 See First Monday's description of my talk here.
December, 5th, 2016
The Honorable Scott Crosby
Mauldin City Councilman Scott Crosby gave an overview on how Donald Trump won the election. His topic was titled, "The Presidential Election - What Happened? Scott was kind enough to give us his notes from his talk - please see them here: https://scottcrosby.info/scottschoice.us/first_monday_2016.html


Donald Trump was not my first choice. He was not even my second choice.

However: In hindsight, none of the other GOP candidates  from Jeb Bush to Marco Rubio to Ted Cruz  could have won the Presidency. They did not know how. Trump used the debates and primaries as a training ground before hitting the main event.

The media: Trump had no program, no strategy, no policies. Trump was all talk, all bluster, and no substance.

I bought Ann Coulter's book, "In Trump We Trust". Coulter had done her homework.
I read Trump's Positions website. There were his positions on all the big issues.

The media lied  big-time, repeatedly, over and over again.

Widespread populist insurgency  against immigration, against globalization's job loss at their expense, and against the political establishment that fostered it.

When asked about the media's portrayal of his fellow workers, he said the majority of media has "overlooked" them completely:

"The average blue-collar worker likes to work hard, play hard and better themselves every day. We are smart enough to see all the widgets coming in from other countries while hearing of all the cut backs here in the states."

He added that Trump's trade deals were a huge "selling point" during the election, especially for people in his industry.

But more than trade, he explained that blue-collar workers support Trump's views on the Second Amendment:

"Blue-collar people like guns. 90 percent of my contacts like to hunt, shoot and keep their families safe. Yes, some people in the media like to downplay the actual intelligence of blue-collar workers. I have been awarded the opportunity to work with the smartest people in the world in their trades.

The unions are also starting to vote to the right because of gun control. My long-time friend is very pro-union and always voted to the left, not this time around."

"Blue-collar workers try to better ourselves, learn new things and do what's best for our families and future generations. That can't be done with all our products being built in other countries. It's time to let someone else with a different background than the average politician take a good hard look at those Trade deals."
- - -
"Battleground states like Ohio, Pennsylvania and Michigan are typically Union (organization labor), but what is happening is the realization of no representation from the Democrats and these Unions who are nothing more than political arms for the Democrats.

But beware: After the election, Democrats in rural America had a similar message for their party:
We saw the electoral disaster coming  and it's your fault.

Nobody argues that the middle class is in decline. But people forget their history. A strong middle-class indicates prosperity. Losing the middle class reflects decline  the oncoming demise of a culture and country.

Anybody remember the American Dream? People realized Trump does.

The American Dream is freedom and prosperity  knowing your children will have better lives than you, generation after generation.

It is populist, and at the same time in line with GOP  not Democrat  principles.

The blue-collar and white-collar middle-class should be GOPers. It is up to the GOP to assure that becomes true.

Bring back the American Dream.

How to do that is simple:
Make America great again!

Why is the GOP so strong at the state level, but comes off being second-rate at the national level?

We did not lose the Presidency in 2008 and Congress in 2006 for ideological reasons, but due to the dominant attitudes within the national GOP. The GOP is heavily influenced by ex-Leftist Neocons, and has settled for being loyal-opposition, also-ran, junior partners to the Left. A shake-up was long overdue.

It is now being discusssed in the media whether the Democrats are in danger of becoming history; that they lack a future. It was only a few years ago that the same was said about the GOP.

The lament prior to Trump was:
1. We are losing
2. The fight was over before it began
3. Our allies have abandoned us
4. The loss is permanent  we are not getting it back

The Left agreed  "cultural wars are over; they lost, we won."
The Constitution would soon be relegated to the dustbin of history.
Neither Party's old-guard establishment seemed to care.

Old-guard, establishment GOP ignored their voters
 But the same is true for Democrats

Freedom or socialism?
- Tell the govt what to do?
- Govt tells you what to do?

Conservative issues are a lot more popular than the GOP. The success in the states proves that.

Liberty  freedom  is not elitist. In fact, it is populist.
Rebelling against King George III proved that.

- In 2016, that translated into Donald Trump

But Trump is solid on the issues  just see his Positions website.

Trump leapfrogged into the spotlight with some great slogans: "Build the Wall", and then "Make America Great Again".

Conservative issues are a lot more popular than the GOP.

Bernie Sanders saw it 
"Donald Trump tapped into the anger of a declining middle class that is sick and tired of establishment economics, establishment politics and the establishment media. People are tired of working longer hours for lower wages, of seeing decent paying jobs go to China and other low-wage countries, of billionaires not paying any federal income taxes and of not being able to afford a college education for their kids  all while the very rich become much richer."

Trumps book, The Art Of the Deal shows that Trump knows how to deal  the give-and-take, the diversions, the trading of a lesser value for a greater one. After decades of experience, such skills are intuitive to Trump.

Trump used the media's lies against them  being against immigration was not racist.
Immigration affects whites, blacks, hispanics  everyone who works and earns his living. Non-whites began realizing that.

"Backlash against rich"?  Trump  "Romney is not rich."
Trumps father gave him a few million to start  unfair?
What is the quickest way to make a small fortune?
- Answer: start with a large one.
Trump took a small fortune, and has made billions.
- That is success by any measure.

As a result, Trump was not beholden to rich contributors and their dictates,
- just voters showing up at his rallies.
No obligation to anyone  except the people.

Son-in-law Jared Kushner  an outsider  revolutionized the campaign-marketing process, and eventually tipped the states that swung the election.

It was the epitome of the super-light startup: to see how little they could spend and still get the results they wanted. Kushner turned it into an actual campaign operation. Soon he was assembling a speech and policy team, handling Trump's schedule and managing the finances. "Donald kept saying, I don't want people getting rich off the campaign, and I want to make sure we are watching every dollar just like we would do in business.'"

Kushner structured the operation with a focus on maximizing the return for every dollar spent. "We played Moneyball, asking ourselves which states will get the best ROI for the electoral vote," Kushner asked, "How can we get Trump's message to that consumer for the least amount of cost?"

FEC filings through mid-October indicate the Trump campaign spent roughly half as much as the Clinton campaign did.

"He put all the different pieces together, and what's funny is the outside world didn't pick up that it was all being orchestrated so well."

For fundraising they turned to machine learning, installing digital marketing companies on a trading floor to make them compete for business. Ineffective ads were killed in minutes, while successful ones scaled.

Just as Trump's unorthodox style allowed him to win the Republican nomination while spending far less than his more traditional opponents, Kushner's lack of political experience became an advantage.

When the campaign registered the fact that momentum in Michigan and Pennsylvania was turning Trump's way, Kushner unleashed tailored TV ads, last-minute rallies and thousands of volunteers to knock on doors and make phone calls.

The result speaks for itself.

See How Jared Kushner won Trump the White House for the full article.


The Future Relies On Education

Bernie's success proves a big group of voters do not get the "freedom vs. socialism" issue.

1960s Leftists taught schools in 1980s, when Reagan dominated politics.
- Patiently waited for our kids to grow up.
- "Give me your child until he is 6, and he is mine forever."

For the 2016 victories to be a lasting success, the GOP needs to take back education.

Talking to Megan Kelly on Political Correctness 
Trump  "We need strength, we need energy, we need quickness, and we need brain in this country to turn it around.

We need solid education in Social Studies, Civics, and History to take the 2016 success to the coming generations.

Grew out of a splinter group from the 1960s Leftists - SDS, etc.

Not unlimited choices in a free market
 regulated choice, bedroom to boardroom

Heroes:
- Teddy Roosevelt
- FDR
- Bismarck  created the Prussian welfare state
The individual should be subordinated to the corporate state
Manipulate behavior for the public good
"Stop worrying and love the state."