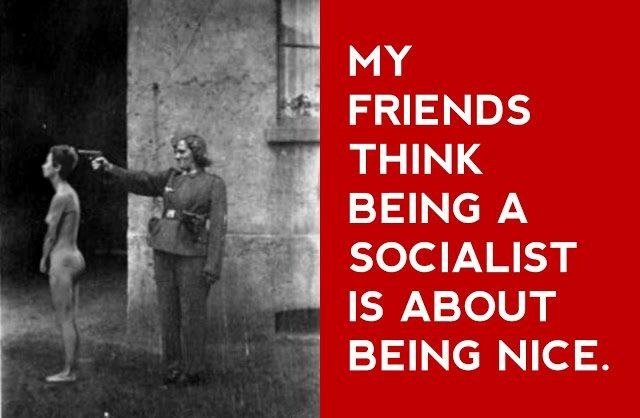 So You Want Socialism ?

Visit     Socialism means giving your freedom to the government     and see if that is the kind of experiences you want ...

What draws you to Socialism?
Better read   Who Gets To Decide?   before you go much further.

Socialism is not about peace and love. It's not about fairness. It is about oppression and enslavement. So do you like trying to control peoples' lives? Is that how you want to be remembered in the history books?

Being a Socialist, you will have to stop those of us who ignore your desires and who continue to act as we choose - to act as free people. Are you ready to tell us what to do? Where to go? How to act? Do you like the use of violence?

Are you ready to kill us? There will be an ever-growing crowd, in ever more strident opposition to you, as you attempt to impose ever more rules and ever more controls, in search of an ever more distant utopia. How many lives are you willing to destroy, simply for opposing what you want?

How will you like the ever-growing need for guards to maintain your own personal security? Who will keep you safe from your guards? Will you be assassinated, like most dictators?

Do you think you can change everybody? Do you think that with a little talk, or a little controlled education, or with a little behavior modification, you can get people to act like you think they should? It has been tried before, by the Soviets, the Nazis, the Chinese, the Pilgrims, and many others - people have tried to change people to be good socialists. It does not work. People are not robots. Human nature does not work that way.

Socialists killed about 140 million people in the Twentieth Century. Understandably, they were not interested in keeping accurate records.

Put that number into perspective: imagine wiping out the six or seven most populous states in the United States: by your own hands, tomorrow morning, everyone will be lying dead in California, Texas, New York, Florida, Illinois, Pennsylvania, and maybe Ohio. Have trouble envisioning how many people are in Ohio? Picture instead South Carolina, North Carolina, and Virginia; when we wake up tomorrow we won't know if everyone in those three states got wiped out last night by the Socialists or not; nobody is counting.

And what of those who are still alive? In what shape will be their lives? Contrast Havana and Hong Kong in 1958 to their standard of living today: one went from dynamic growth to spiralling decline and dismal poverty; the other has been a model for soaring economic growth and abundant wealth. Contrast present-day Venezuela and Chile. Contrast Britain under Margaret Thatcher with its present state. Contrast East and West Germany from 1945, after WWII, to the fall of the Berlin Wall in 1990.

Contrast the U.S. and the Soviet Union during that same period. Recall the impact of two simple actions taken by President Reagan, which more than anything else hastened the downfall of the Soviet Union: (1) outspending the USSR militarily, driving that country into economic bankruptcy, and (2) in a speech by the Berlin Wall, calling out with all the world listening, "Mr. Gorbachev, tear down this wall!". The embarrassment that Socialism needed fences to keep its people in left it naked in all its faults, for all the world to see.

What is the alternative? Freedom. Stop governments from putting limits on peoples' rights to their lives, their liberty, and their property - to earn it, to own it, to build it, to sell it, to use it to the benefit of their lives and that of their families as they see fit; the right to act and to live as each individual believes is right - irrespective of others' beliefs. Governments must be limited - limited to protecting the rights of the people to whom they are responsible. Freedom is the basis for all progress, and the only criteria for the continued existence of any government.